You are here:
Product ReviewsUncategorized 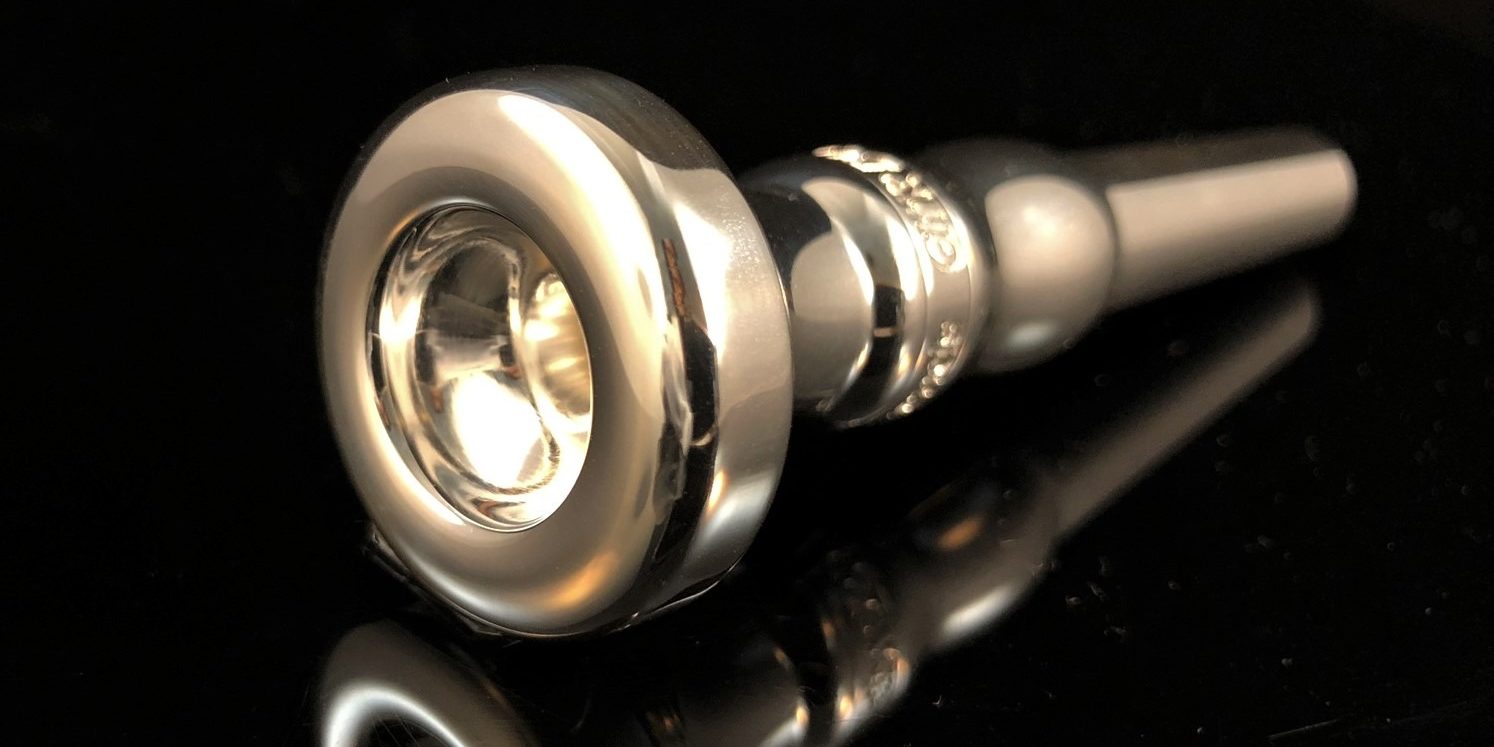 Legends Brass has had the pleasure of working with the legendary Randy Dunn to create the new GIT R DUNN. Mr. Dunn is a professional trumpet player based in the Houston area. He has spent much of his career performing with symphony orchestras, brass quintets, and other classical chamber music ensembles, but in the last few years has added more jazz, big band, and ‘blended’ church performances which could require both classical and contemporary styles in the same performance. To perform his best on this wide variety of musical genres he began to realize he needed about three mouthpieces that he could switch between easily. He tried two Legends models, the .600″ JT CS and the .595″ RM 16S. These two cover his lead, solo, and piccolo trumpet needs. The third mouthpiece in his kit was a special project. He needed a mouthpiece for symphonic and classical playing that had the rich dark tone desired for that genre, but with a cup shape and depth to support extended play, often in the upper register. In addition, a smaller inside diameter than traditionally found on symphonic mouthpieces would facilitate quick and easy switching to the other mouthpieces in his kit. These were the goals in creating the Legends GIT R DUNN. Below is Mr. Dunn’s review of the finished product. Spoiler alert: we got it done!!

“If you need to be able to switch back and forth between classical and lead trumpet style music, or if you are playing a lot of demanding orchestral or classical chamber music or concert music and you are afraid that you might not have the chops, range, and endurance to get the job done, then the Legends .600” GIT R DUNN trumpet mouthpiece will get the job done, for sure!  This mouthpiece has definitely made my trumpet playing a lot easier, and both of my Legends Brass mouthpieces have made my job of playing music a lot more fun and joyful for me.”   -Randy Dunn

This mouthpiece has a small inner diameter rim size (.600”) and it also has a broad, cushion rim (which makes the mouthpiece rim diameter feel larger than it actually is.),  It also has a medium-shallow (but not too shallow) bowl-shaped cup, along with the exclusive Legends enhanced #27 throat and special Legends cylinder (venturi) length.  The result of this combination of features is that this mouthpiece greatly increases the player’s endurance and also significantly extends the player’s stable, reliable upper register range.   And yet, delightfully and amazingly, this mouthpiece also produces a rich, fat, beautiful, broad, darker, strong core, characteristically classical or orchestral trumpet sound with the quality of tone that is demanded by professional trumpet players (and serious students) who play this type of music either primarily or exclusively.

Lead players may also want to use this mouthpiece at times when they want a fatter, warmer sound with less edge and smoother blend than what they get from their normal, typical lead trumpet mouthpiece.  And jazz trumpet players will like this mouthpiece because it will enable them to play solos with a big, beautiful, rich sound, and yet it will also allow them to easily soar up into the extreme upper register if the spirit moves them to do so.

NOTE:  Please also see my review of the related Legends Brass .600” JT CS mouthpiece at the following link for more information about that mouthpiece:  https://legendsbrass.com/2019/09/05/randy-dunn-reviews-jt-cs-600-and-rm-16s-trumpet-mouthpieces/ ]

Like the .600” GIT R DUNN mouthpiece, the Legends .600” JT CS is also a very versatile mouthpiece.  Although, in my opinion, it is best suited for lead trumpet playing, the JT CS also works great for jazz soloing (especially when extended range is needed or desired), and most trumpet players could probably even get away with using it on light classical and orchestral gigs.  But, the .GIT R DUNN mouthpiece is much better suited for classical and orchestral music, especially heavy-duty, more intense selections that require a lot more weight,  power, and volume of sound.  I am able to drive the GIT R DUNN mouthpiece a lot harder, enabling me to produce stronger notes at greater volumes on it than I am able to produce on the JT CS (Although, the JT CS has more edge to its sound, which creates the illusion of loudness that enables it to more easily cut through a big band that is playing loudly.)  Plus, the GIT R DUNN mouthpiece also blends much more easily with other orchestral trumpeters and brass players, especially when using this mouthpiece to play first trumpet parts in an orchestra or chamber music group, or similar ensemble.

If, like me, you do a lot of switching back and forth between playing classical/orchestral music gigs and playing lead trumpet/jazz gigs, or if you often play both styles of music on the same gig (as is often the case with theater gigs, pops concerts, and with the blended church service gigs which are so common these days), then I highly recommend that you get both the Legends .600” GIT R DUNN mouthpiece and the Legends .600” JT CS mouthpiece, so that you have exactly the right tool (and the best tool) to use, no matter what kind of music you are playing.  With these two mouthpieces, you will be ready for anything.

The Story Behind the Development of the .600” GIT R DUNN Trumpet Mouthpiece

What follows is the story of how Derek Saidak at Legends Brass worked with me in designing this special, unique, custom mouthpiece, the .600” GIT R DUNN mouthpiece.  It explains why and how this highly unique, great-sounding mouthpiece came to be.

I have spent most of my long playing career primarily as a classical trumpet player (but also playing a few jazz and lead trumpet gigs from time-to-time over the years, whenever those types of gigs would come along.)  But in recent years, I have been doing a lot more lead trumpet playing (in big bands and in small, pop music horn section bands), and I have also been doing a fair amount of jazz soloing, both in big bands and in jazz quintets and other small jazz ensembles.

I loved this mouthpiece (the .600” JT CS) so much that I wanted to play on it all the time!  But, even though I probably could have gotten away with using the JT CS for all of my trumpet playing, I knew that I still really needed a separate mouthpiece to use on classical and orchestral gigs, one that sounded–with little effort and fudging–more characteristically like the sound produced by other trumpeters who play in the major orchestras.  It was also important to me to get precisely the tone quality that I wanted, not just “close enough.”  This was especially important for me to be able to get that exact type of sound, because I often perform on gigs that require me to play in sections with trumpet players and brass players who play in the major orchestras in town (Houston Symphony, Houston Grand Opera, and Houston Ballet Orchestra), as well as with fine players from the various local theater orchestras and top classical freelance trumpet players and brass players in the area.

Prior to my switching to the Legends Brass mouthpieces, I was also finding it difficult to switch back and forth between my old classical trumpet mouthpiece and my lead trumpet mouthpiece.  Because of the differences in those two old mouthpieces of mine (especially the different bore sizes and different cylinder/venturi lengths), it took me a long time to re-adjust to the other mouthpiece when I had to switch back between the two types of mouthpieces when I had to play different styles of music.  This was especially a problem when I had to play blended church service gigs (with both traditional and contemporary church music alternating frequently in the same church service) and when I had to play some theater gigs and pops concerts, which also often require playing very two different styles of music in the same show or performance.  Guest soloing in local community choir concerts and other ensembles also often required me to to play more than one style of music in the same concert, which also involved switching mouthpieces during a performance.

But, I did not want the two mouthpieces to sound the same, since I would be using them for different styles of music that had different desired tone qualities and playing needs.  I believed that the Legends JT CS mouthpiece might produce a more orchestral/classical tone quality if it had the Legends Chicago Backbore on it (instead of the standard S backbore), and if the mouthpiece also had a slightly deeper cup, (closer to a medium depth cup, but still shallow enough to aid with the upper register and endurance, which meant that a medium-shallow cup sounded like it might be just right for my purposes.)  So, knowing what my goals were for sound quality and features, and understanding what my purpose would be in having this new custom mouthpiece created for me, Derek used these ideas and ideals of mine as a starting point, adding his own feature recommendations, adjustments, and mouthpiece design knowledge to brilliantly design the new .600” GIT R DUNN trumpet mouthpiece, which does exactly what I need it to do.

If you need to be able to switch back and forth between classical and lead trumpet style music, or if you are playing a lot of demanding orchestral or classical chamber music or concert music and you are afraid that you might not have the chops, range, and endurance to get the job done, then the Legends .600” GIT R DUNN trumpet mouthpiece will get the job done, for sure!  This mouthpiece has definitely made my trumpet playing a lot easier, and both of my Legends Brass mouthpieces have made my job of playing music a lot more fun and joyful for me.